Not many know but worn suspension bushings have an effect on braking performance.
In particular Radius rod bushings tend to absorb most of the loads under braking resulting in severe wear and reduced braking efficiency over time.

MRC Performance is proud to be Australian owned and operated business and we feel it is important to sell Australian made products and support other Australian businesses.

SuperPro bushings can be used in strut bars, radius rods and trailing arm locations, which will improve the road holding, handling and tyre wear of any passenger car or 4WD. This is possible because SuperPro products achieve consistent tyre-to-road-alignment, particularly under braking and cornering loads. In many cases there is little or no effect on NVH, thanks to careful design by our R&D technicians.

SuperPro products offer a range of advantages including;

All SuperPro Suspension Bushings, Sway Bars and Suspension Arms are covered by a Lifetime Warranty. This means that if a SuperPro product fails, it will be replaced free of charge without exception, this includes both motorsport and off-road use. 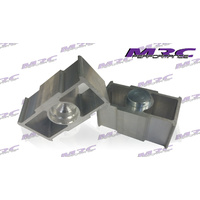