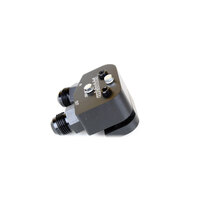 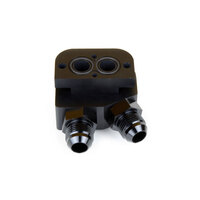 mproved Racing designed this oil cooler adapter specifically for the LS1 and LS2 Pontiac GTO and Holden Commodore/Monaro. It's innovative design makes it the only adapter on the market that is 100% bolt-on, with no oil filter relocation required.

The adapter features two 1/8" NPT ports for oil pressure and temperature sensors, or for a turbo oil supply line. It is machined from 6061-T6 billet aluminum and is anodized for durability. Features standard female -08AN O-ring boss threads for optional anodized adapter fittings in your choice of -08AN, -10AN or -12AN lines.

Included in the kit is a bracket which relocates the hard power steering line out of the way of the adapter. This is a 100% bolt-on solution; no fabrication, bending or line modification is required.

We recommend using one 90-degree and one 45-degree AN fitting to connect the oil lines to this adaptor.

For improved performance using the most efficient and highest quality parts you can’t go past MRC Performance! 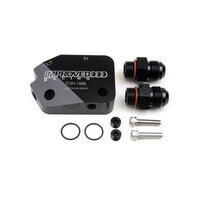