MRC Pacemaker Extractors PH5013 Holden HK-HZ 6 cylinder
SUITS:
1968–1969 Holden HK
1969–1970 Holden HT
1970–1971 Holden HG
1971–1974 Holden HQ
1974–1976 Holden HJ
1976–1977 Holden HX
1977–1980 Holden HZ
Part #: PH 5013
P/Steering: Yes
Gasket: DSF 2
Air Con: No
Primary Pipe: 1½" (38mm)
Oxy Sen: N/A
Secondary Pipe: -
E.G.R: N/A
Outlet: 2" (51mm)
Y Branch: N/A
Fitting Time: 1½ Hrs
Note:Will not fit Hydromatic and Powerglide autos
For over a quarter of a century, Pacemaker has been innovating, designing and manufacturing some of the highest quality exhaust headers in Australia.
Pacemaker headers have Precision Laser cut and machined thick flanges to eliminate leaking and warpage and are jig welded for guaranteed fitment. Pacemaker uses turbulence eliminating 'Pipe Over Cone™' technology which not only dramatically improves flow through the exhaust but, combined with shot peen blasting, also helps to lengthen the life of the product.
Pacemaker headers are finished in a bright and attractive, specially developed blue heat proof (to 1270 degrees) coating and come with a 2 year road use warranty (excluding LPG vehicles).
How much increase in power will I get? In most cases around 10% is quite achievable. This may mean if you have, for example, a 4WD vehicle delivering around 70 kilowatts at the wheels you could expect possibly 6 to 10 kilowatts increase. If you have a V8 5.7 Litre commodore with around 160 kilowatts at the rear wheels you could expect to reach 170 to 180 kilowatts. This is just a generalisation and other factors do become involved. Cold air intake and open exhaust systems encourage the full effect of a well-designed set of headers.
What is the difference between a TRI-Y and a 4-into-1 design? A 4-into-1 design is perhaps the most traditional design. This design is common to the US market and is well used within the drag race fraternity. The basic principle behind the design is that the scavenging effect within the collector cone effects the three remaining pipes (in a V8 half), instead of limiting the pulse to the very next pipe in the sequence. This generally results in a header that performs very well in the mid-range to top end of the engines performance.
A TRI-Y on the other hand splits the firing order evenly and uses the secondary pipes as sequential collectors. This results in generally a greater scavenging effect due to the fact that scavenging is achieved at 2 different points in the header design, firstly at the primary to the secondary collector and secondly to the secondary outlet collector. Generally this improves torque in the lower to mid-range performance of the engine. Both designs are usually more efficient than a standard manifold and both offer distinctly different advantages.
What is scavenging? Scavenging is one of the most critical parts to a design of a header. The tubes volume (diameter and length) is chosen to represent a discharge of spent fuel or pulse being discharged from the engine at a given rev range (usually mid to top end), without competing with the next charge. This pulse then enters the collector cone with a greater volume than the surrounding connected pipe(s). This creates a low pressure (or vacuum) at the exit of the next pipe. This vacuum then in turn sucks at the next pulse travelling through the next pipe in the sequence, vacuuming or scavenging the cylinder bore clean. This aids towards an unpolluted cylinder bore, ready for the next clean dose of air fuel mixture.
If you’re looking for performance enhancement it’s time to get your quality Pacemaker extractors for the best price from MRC Performance! 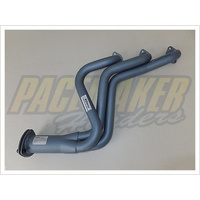