What is the difference between a TRI-Y and a 4-into-1 design? A 4-into-1 design is perhaps the most traditional design. This design is common to the US market and is well used within the drag race fraternity. The basic principle behind the design is that the scavenging effect within the collector cone effects the three remaining pipes (in a V8 half), instead of limiting the pulse to the very next pipe in the sequence. This generally results in a header that performs very well in the mid-range to top end of the engine's performance.

A TRI-Y, on the other hand, splits the firing order evenly and uses the secondary pipes as sequential collectors. This results in generally a greater scavenging effect due to the fact that scavenging is achieved at 2 different points in the header design, firstly at the primary to the secondary collector and secondly to the secondary outlet collector. Generally, this improves torque in the lower to the mid-range performance of the engine.

What is scavenging? Scavenging is one of the most critical parts to a design of a header. The tubes volume (diameter and length) is chosen to represent a discharge of spent fuel or pulse being discharged from the engine at a given rev range (usually mid to top end), without competing with the next charge. This pulse then enters the collector cone with a greater volume than the surrounding connecting pipe(s). This creates a low pressure (or vacuum) at the exit of the next pipe. This vacuum then, in turn, sucks at the next pulse traveling through the next pipe in the sequence, vacuuming or scavenging the cylinder bore clean. This aids towards an unpolluted cylinder bore, ready for the next clean dose of air-fuel mixture. 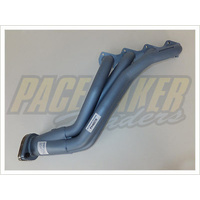 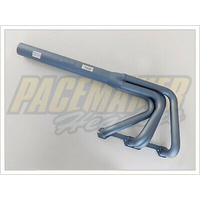